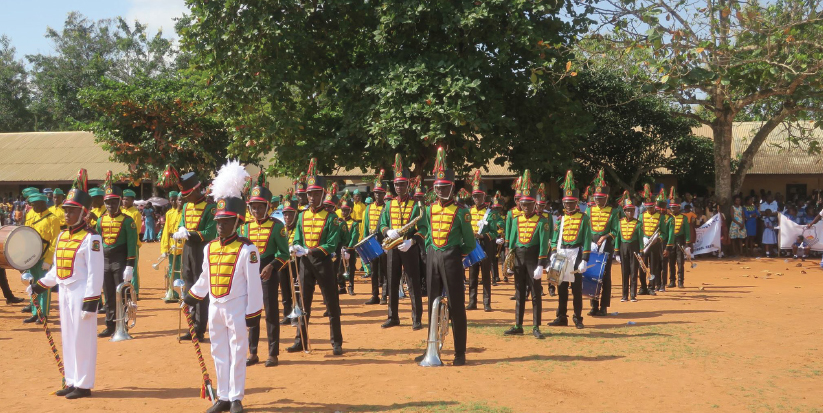 The great success we experienced through the Tutorial Service Program (TSP) made us aware that we needed to expand our tutoring/after school program into a more formalized educational setting. On January 7, 2010 we transformed our library and TSP into the Human Factor Leadership Academy (HFLA) elementary school. Fifty-six 4- and 5-year-old boys and girls were enrolled. Each received a uniform, thanks to the efforts of Hunter Jenkins, son of Jason Jenkins, Dr. Adjibolosoo’s former MBA student.

Part of the school’s launch included establishing a marching band to reinforce hard work, camaraderie, the merits of practice, and school pride. Though the band started with a single side drum, this was all it took for HFLA teachers to attract the attention of interested students and their families. In the following years, we acquired a bass drum and our teaching staff taught students to play these two percussion instruments as they marched into their various classrooms.

From there, we aimed to expand our band program to include brass instruments. Dr. Adjibolosoo donated his only—and highly cherished— trumpet for students to use. In the following year, an elder from Dr. Adjibolosoo’s church, Russ Armstead, donated his own trumpet, which had been collecting dust in storage. Neighbor Mark Hammond donated his trumpet, previously used during his service in the US Navy. A married couple from New Life Community Church in Burnaby (British Columbia) in Canada heard about the HFLA children’s band and donated a trombone their son was no longer using.

With the help and generosity of the above-mentioned, as well as Eileen Griffin, Selorm Adjibolosoo, and Elsa Aramburo, a brass band emerged. A peak event occurred in March 2018 when the band wore new uniforms and marched in Ghana’s Independence Day Parade, thanks to the generosity of board member Stephen Bothwell. The HFLA marching band continues to instill pride, discipline and musicianship in students today and has become the ambassador of the HFLA to all of Ghana and the rest of the world.

<< Back To Success Stories